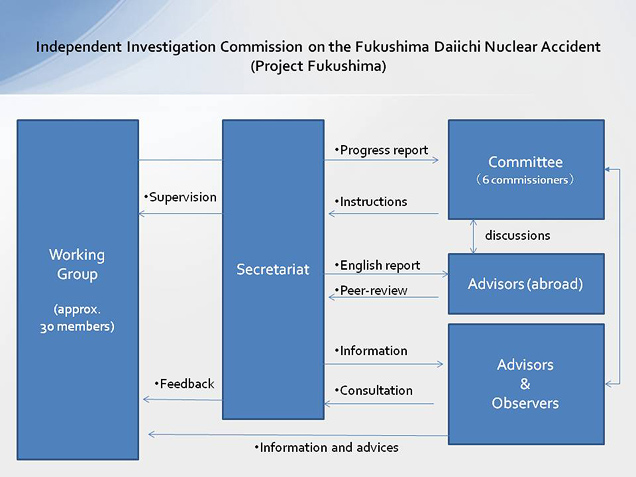 The Commission consists of seven respected experts from various fields pertinent to the investigation. Under the supervision of the Committee, a Working Group composed of renowned professionals – including researchers, lawyers, journalists and other specialists – has been carrying out in-depth surveys, hearings, interviews and data analyses.

Core members of the Secretariat

Takashi OTSUKA is a science journalist and an adjunct fellow of RJIF. During his distinguished career with the Asahi Shimbun (Japan’s leading daily newspaper), he was a staff science correspondent (covering science and nuclear issues) with the American general bureau from 1992 to 1995, Science News Editor at the Tokyo head office from 2001 to 2004, President & CEO of Asahi Shimbun America from 2004 to 2006, and Hitachi Bureau Chief (covering the northern part of Ibaraki prefecture, including the Tokai-mura nuclear research institutions) from 2008 to 2010.

Kay KITAZAWA oversees the overall operation of Project Fukushima. She is a specialist in City Planning and Management, with expertise in measurement and analyses of pedestrian movement patterns at neighborhood scale. She advises prefectural governors and mayors in Japan for the formulation of Special Economic Zone plans. Before joining RJIF, her role at London School of Economics and Political Science involved developing international investigations on urban policies in the world’s growing metropolises. She has also worked as a Geographic Information Systems (GIS) consultant for a number of commercial and research projects in the UK and EU as part of her PhD study at University College London.