We live in a world that has lost its sense of direction. Between the Lehman Shock global financial crisis, protracted wars in Iraq and Syria and the changing balance of global economic and political power, the American-led model that seemed so triumphant after the end of the Cold War has been shaken, and lost much of its appeal. But nothing new has risen to take its place, leaving the world groping for new certainties and ideas.

Might this be the time for Japan to step forward and play a larger role in global political, economic and cultural leadership? During its two “lost decades” of stagnation and drift, Japan came to be regarded as a global has-been, offering the world little more than a grim cautionary tale of complacency and decline. But today, the world is taking a renewed look at Japan. Troubles elsewhere have brought a growing recognition of Japan’s strengths, and its still enormous potential as the world’s third-largest economy. At the same time, the shifting balance of power in its own geo-political neighborhood has also appeared to give Japan a new resolve to reverse its long slide, and assert its relevance in a suddenly less certain, more multipolar world.

Rebuild Japan Initiative Foundation began the first part of a research project, Why Japan Matters, in October 2015. The project had two broad goals. One was to reveal how Japan ― including its people, its companies, and its ideas and values ― is already contributing to the world. The other was to seek out areas in which Japan could potentially offer even more, and exert a greater global influence commensurate with its still formidable economic heft. One of the achievements of the first stage was a book in Japanese called Galapagos Cool. An English edition is in the editing stages. For more information on the first part of the project, please see the Why Japan Matters page.

Beginning in April 2017, we launched the second stage of this research project under a new name, Galapagos Cool.

The term Galapagos Cool is a play on one of the key concepts to emerge out of the project’s first stage: that being different can be an advantage.
Japan has never had a problem being unique. In fact, during its so-called lost decades, the term Galapagos was used to ridicule Japan as an inward-looking place so isolated from global markets and trends that it had evolved its own ecosystem of products and technologies. This ‘Galapagos Syndrome’ was exemplified in cell phones, which were often more sophisticated and advanced than those in other countries, but could only be used in Japan.

The idea behind Galapagos Cool is that this uniqueness can actually be a source of appeal, if Japan uses it to engage with the world. In an era when globalization seems to bring a monotonous homogeneity, putting the same internationally branded stores in New Delhi as in New York, there is more value than ever in being fresh and innovative. Japan’s economy is ranked number one for complexity by the Atlas of Economic Complexity. Japan has much to offer, having accumulated a wealth of not just Galapagos products, but also uniquely different experiences and values. These have already begun adding to Japan’s global appeal, seen in the growing popularity overseas of Japanese brands and designs, and in the boom in inbound tourism. But Japan has yet to fully tap this potential, and find yet more ways to make meaningful contributions to the world.

We thus seek to flip the concept of Galapagos on its head, to turn it from a symptom of weakness into a source of strength. In the second stage of our project, we will use this idea as a leaping point to dive more deeply into how to unlock Japan’s still latent value, and to broaden the nation’s appeal. 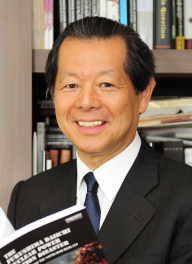 Profile
Jonathan Soble joined AP Initiative in 2018 after a 15-year career in journalism, during which he served as Tokyo correspondent for the New York Times and Tokyo bureau chief for the Financial Times. Born in Canada, he attended the University of Toronto and the Columbia University Graduate School of Journalism. Jonathan cultivated an interest in Japan as a high school and university exchange student, and later as a participant on the Japanese government’s Japan Exchange and Teaching program, in Kochi Prefecture. After graduating from Columbia with a Masters degree in journalism, he joined the Tokyo bureau of Dow Jones Newswires in 2002, and later moved to Reuters, the FT and the Times.

Profile
Shunta Takino is Research Assistant to Yoichi Funabashi and Staff Director for both the “Liberal International Order” and “Galapagos Cool” projects, and serves as an Editorial Assistant for Tokyo Review.
He holds a B.A. in Philosophy, Politics and Economics from the University of Oxford. Raised in Japan and the U.K., he speaks both Japanese and English fluently.
He has previously been in work placements at Project Syndicate and the New York Times among other organisations. In 2017, he also founded the Oxford-Kyushu Model United Nations Camp, an educational initiative to train Japanese students to become global leaders of the 21st century.

Profile
Harry Dempsey was the Research Assistant to Dr. Funabashi, Chairman of AP Initiative. He has worked for Shinko Research, a think-tank part of the Kobe Steel Group, at which he produced research for Japan Oil, Gas and Metals National Corporation (JOGMEC) and provided consultancy services for Kobe Steel’s Corporate Planning Department. He has worked for London Research International, an energy research and consulting company, and on the JET Program as an English teacher. He holds a BA in Philosophy from Cambridge University.
Tweet
Print