The second Abe administration, which lasted for seven years and eight months, turned out to be the longest administration in Japan’s constitutional history. How was this made possible? What did this longest-served stable administration achieve and leave behind?

API’s “Critical Review of the Abe Administration” project aimed to examine the Abe administration’s governance and policy responses. The administration has worked on a wide range of policy challenges, including economic policy, diplomacy and security, work style reform, trade liberalization, and historical issues. This has been made possible by the administration’s distinctive style of governance, including strong leadership from the Prime Minister’s Office, ability to navigate party politics, and overwhelming victories in national elections. On the other hand, the Abe administration left many issues unresolved, including the revision of the Constitution, gender equality, and several scandals that have undermined the legitimacy of the country’s democracy.

This project took up nine major themes related to the policies promoted by the administration, and examined why and how each of these themes did or did not develop based on interviews with more than 50 people working with the administration. We believe that the lessons learned from this review are extremely important for rebuilding political centrism based on thorough debate and compromise, and for strengthening competitive party-based democracy in Japan.

In the “Critical Review of the Abe Administration”, we have organized the issues of the second Abe administration into nine major categories. Leading experts in each field have offered their insights on the chosen themes in each chapter. Since December 2020, the project had fourteen plenary meetings total, and the project team also held cross-disciplinary discussions. Professor Nakakita from Hitotsubashi University served as the chair of the project.

※Detailed profile of each author follows below

On January 20, 2022, Asia Pacific Initiative published “The Critical Review of the Abe Administration: Politics of Conservatism and Realism (検証 安倍政権 保守とリアリズムの政治)”. Currently only available in Japanese. 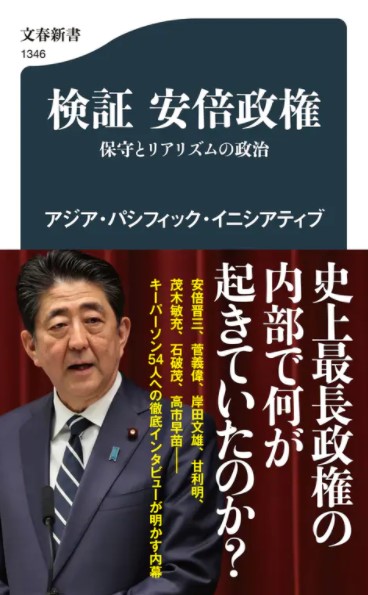 Koji Nakakita received his Ph.D. from the University of Tokyo in 1997. Before joining the Hitotsubashi faculty in 2011, he was a member of the department of politics at Rikkyo University for ten years. Professor Nakakita is a specialist of the politics and history of contemporary Japan. In English, he has published a book, “The Liberal Democratic Party of Japan: The Realities of ‘Power’” (Routledge, 2020).

SAKAIYA Shiro
Professor, Graduate Schools for Law and Politics, the University of Tokyo

Shiro Sakaiya received his Ph.D. from the University of Tokyo in 2008. He specializes in Japanese politics and is the author of the following books: The Constitution and the Public Opinion (Kenpo to Yoron, 2017) , Political Participation (Seiji Sankaron, co-authored, 2020).

Takashi Terada received his Ph.D from Australian National University in 1999. Before taking up his current position in April 2012, he was an assistant professor at National University of Singapore (1999-2006) and associate and full professor at Waseda University (2006-2011). He also has served as a visiting professor at University of Warwick, U.K. (2011 and 2012) and a Japan Scholar at Woodrow Wilson International Center for Scholars, Washington D.C. (2012). His areas of specialty include international political economy in Asia and the Pacific, theoretical and empirical studies of regional integration, and Japanese politics and foreign policy. His latest book is East Asia Versus the Asia-Pacific: Competing Regional Integrations (in Japanese University of Tokyo Press, 2013). He is the recipient of the 2005 J.G. Crawford Award.

Naoko Kumagai is professor in the School of Global Studies and Collaboration at Aoyama Gakuin University. Her research focuses on international relations theory, humanitarianism, and conflict resolution. She earned a Ph.D. in political science at the Graduate Center, City University of New York. Her publications include The Comfort Women: Historical, Political, Legal, and Moral Perspectives (Tokyo: I-House Press, 2016), which is the English version of Jūgun Ianfu Mondai (The Issue of Comfort Women) (translated by David Noble). Since 2021, she has served as director of the Japan Chair at the University for Peace (Universidad para la Paz in Costa Rica)

Prof. Takenaka specializes in Japanese Politics and Comparative Politics. He has been affiliated with the National Graduate Institute for Policy Studies since 1999, during which he also served as a visiting scholar at Stanford University. He earned his BA in law from the University of Tokyo, and his Ph.D. in political science from Stanford University. His publications include Shusho shihai [Prime Minister’s Rule] (Chuo-koron Shinsha, 2006) and the award-winning Sangiin to wa nani ka [What Is the House of Councillors?] (Chuo-koron Shinsha, 2010). Failed Democratizatoin in Prewar Japan: Breakdown of a Hybrid Regime (Stanford: Stanford University Press, 2014). “Evolution of Japanese security policy and the House of Councilors,” Japanese Journal of Political Science, 22:2, (June 2021), 96-115. “Expansion of the Japanese prime minister’s power in the Japanese parliamentary system: Transformation of Japanese politics and the institutional reforms” Asian Survey 59:5 (September/October 2019), 844-865.

Professor Tsuji’s research interest is on gender and politics in Japan, including the political representation of women, welfare regimes, and gender and family policies. Her publications in English include “Women and the Liberal Democratic Party in Transition” in Beyond the Gender Gap in Japan edited by Gill Steel (University of Michigan Press, 2019), and “Explaining the Increase in Female Mayors: Gender-Segregated Employment and Pathways to Local Political Leadership” in the Social Science Japan Journal, 20(1): 37–57, 2017.

Kenneth Mori McElwain is Professor of Comparative Politics at the Institute of Social Science, University of Tokyo. His research focuses on comparative political institutions, most recently on differences in constitutional content across countries. He received his BA from Princeton University and PhD in political science from Stanford University, and previously taught at the University of Michigan, before moving to his current post in 2015. His work has been published in a number of journals and edited volumes, including American Journal of Political Science, Journal of East Asian Studies, Social Science Japan, Chuō Kōron, and the Journal of Japanese Studies. He was the co-editor of Political Change in Japan: Electoral Behavior, Party Realignment, and the Koizumi Reforms, APARC/Brookings Institutions Press. He also serves as Editor-in-Chief of Social Science Japan Journal, published by Oxford University Press, and is a board member of the UTokyo Center for Contemporary Japanese Studies.