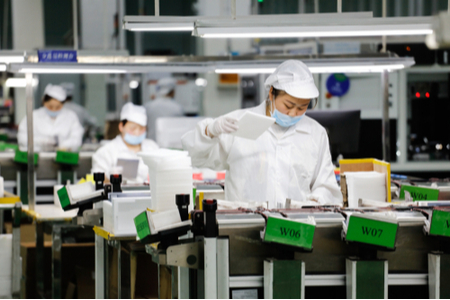 With its future uncertain amid ongoing U.S.-China confrontations, what strategy should Beijing take to aim at the sustainable development of its economy?

Reform of the market for factors of production — all the resources that businesses use to obtain what they need in order to produce goods or services — holds the key to observing where the Chinese economy is heading.

Since March 2020, the Chinese Communist Party (CCP) has issued guidelines on improving mechanisms for market-based allocation of production factors.

The guidelines listed five key factors of production — land, labor, capital, technology and data — and stressed the need to facilitate building and development of the factor market through achieving highly efficient allocation of those factors based on market mechanisms, and removing institutional barriers that hinder the smooth flow of production.

In January this year, based on those guidelines, China’s State Council released a plan to implement a pilot comprehensive reform of the factor market, detailing the trials for each of the five key factors.

The plan includes noteworthy targets such as efficient allocation of land resources throughout industries, increased mobility in the labor market by deploying a system to evaluate workers’ skills and the creation of rules on intellectual property protection for new technologies and data distribution.

The document states that the country aims to obtain “landmark achievements” in its reform efforts by 2025.

The plan was presented in detail at the National People’s Congress in March.

The reform of the factor market can be described as the last stage of China’s marketization, which has been ongoing since the 1980s.

This is because factor market reforms are deeply related to institutional reform which could not have been put into practice until now. Moreover, this is an area that had been put off for fear that movements of production factors could cause damage to the economies of certain regions.

It is important to look at land reform in connection with reforms that have previously been implemented.

In recent years, a major achievement has been seen in China’s land system reform in rural areas, with the country conducting reform to divide the three rights governing farmland — ownership rights, contract rights and management rights.

However, land reforms have been conducted using the overwhelming authority of local governments, which tends to lead to the inefficient allocation of farmland as well as collusive relationships between local authorities and land developers.

Under the factor market reforms, China aims to solve such problems and create a uniform nationwide market mechanism.

Furthermore, the reform of workforce mobility is closely related to the reform of the household registration system that China has been working on.

Since roughly a decade ago, the Chinese government has implemented measures including abolishing the dual structure between urban and rural areas, built up under a household registration system that strictly limits the migration of people from the latter to the former, and introducing a system of issuing temporary residence permits for migrant farmers.

Still, strict hurdles are set for obtaining permits to live in large cities with a population of 5 million or more.

The latest factor market reform plan calls for the simplification of procedures related to transitions of household registrations and unification of individuals’ information related to public health insurance to improve data portability.

But it is uncertain whether such reforms will lead to liberalization of labor transfers to urban areas.

Another notable aspect of a series of factor market reforms is that it deals not only with conventional factors, like land, labor and capital, but also new factors such as technology and data.

As for technology, the plan lists measures such as the setting of government standards for new technologies and skills related to professions that utilize them — including artificial intelligence, the internet of things and cloud computing — as well as building a capital market for research and development.

Regarding data, the Data Security Law and the Personal Information Protection Law came into effect in 2021, which, together with the Cybersecurity Law that was enacted in 2016, offer legal systems for networks that respond to digitization.

Because a system to centrally manage data is required to realize other goals in the plan such as accelerating transfers of land management rights and improving portability of household registrations, creating a legal framework concerning data is indispensable for efficient distribution of production factors.

In other words, the Chinese government listing data as one of the key production factors indicates that it is placing great emphasis on promoting digitization in the country’s politics, economy and society.

As a matter of fact, the term “digital” comes up more than 70 times in the outline of China’s 14th five-year plan, released in March 2021.

Moreover, the 14th five-year plan for the development of the big data industry announced by the Chinese Ministry of Industry and Information Technology later that year states the need to “give full play to the multiplier effect of data as a new factor of production, use data flow to lead the flow of technology, material, capital and talent, open up production, distribution, circulation and consumption and promote the optimal allocation of resource factors of production.”

The plan says the creation of systems for data distribution will “accelerate the comprehensive linking of domestic and international, production and daily life, and online and offline” to drive profound changes and provide support for the establishment of the new pattern of development.

Last summer, China came up with a radical policy focusing on redistribution of wealth under the name “common prosperity.”

A meeting of the CCP’s Central Finance and Economic Commission held in August stated that common prosperity is an essential requirement of socialism and advocated for “tertiary distribution” — meaning redistribution in the form of voluntary donations by individuals and institutions.

In response, Chinese tech giants Alibaba Group Holding Ltd. and Tencent Holdings Ltd. both pledged to invest as much as 100 billion yuan by 2025 to support the campaign.

As can be seen in its 14th five-year plan, China’s medium- to long-term economic policies have been apparently focused on goals to accelerate reforms on the supply side such as promotion of innovation and digital society.

Therefore, a series of measures taken under the common prosperity policy caused some to fear that Chinese President Xi Jinping might be trying to set a new course of action to return to the basic principles of socialism.

But looking at China’s moves that followed, it is clear that the Xi administration continues to focus on policies to facilitate economic development through improving efficiency on the supply side.

Such a view can be supported by the fact that the term “common prosperity” was mentioned only once in the government work report delivered by Premier Li Keqiang at a National People’s Congress session in March.

Rather, it looks like the Xi administration believes it is unavoidable for a series of factor market reforms to trigger further widening of wealth gaps and therefore put forth the common prosperity policy as a vaccine-like preventive measure to avoid being hit by public criticism.

If the Chinese government is going to deploy common prosperity like a vaccine, it should be administered a number of times and it will obviously cause side effects — not to mention the education services industry, which has suffered a devastating blow from the crackdown.

How should Japan’s businesses cope with the Chinese economy amid such uncertainties?

First and foremost, they should recognize again the fact that in China, the relationship between companies and the government is not straightforward.

For instance, Alibaba already has an affiliated public welfare fund that provides money for programs to fight poverty. A huge “donation” of 100 billion yuan made by Alibaba will be used through the fund to help low-income citizens and it is up to the firm to decide how to use the money.

Looking at how the system works, it is difficult to say that the common prosperity policy is a return to traditional socialism.

On the other hand, we must not forget that doing business in China means you are constantly under the risk of being greatly affected by changes in the country’s politics.

Particularly now that China’s economic growth is in a downward phase and the country’s “COVID zero” policy is bringing about a downside pressure on the economy that is hard to predict, the factor market reforms are likely to face stronger headwinds.

We should also note that both the Chinese government and companies are still at a stage of feeling their way around in regards to the rapidly progressing digitization of the society and economy.

Both the government and the private sector of Japan need to discuss how they can cooperate with China from now on in cross-border data sharing and rule making.

That is why in starting the discussions, it is ever more important to grasp what is really going on.

Disclaimer: The views expressed in this API Geoeconomic Briefing do not necessarily reflect those of the API, the API Institute of Geoeconomic Studies or any other organizations to which the author belongs.