Geoeconomic Briefing is a series featuring researchers at the IOG focused on Japan’s challenges in that field. It will also provide analyses of the state of the world and trade risks as well as technological and industrial structures. (Editor-in-chief: Dr. SUZUKI Kazuto, Director, Institute of Geoeconomics (IOG); Professor, The University of Tokyo) 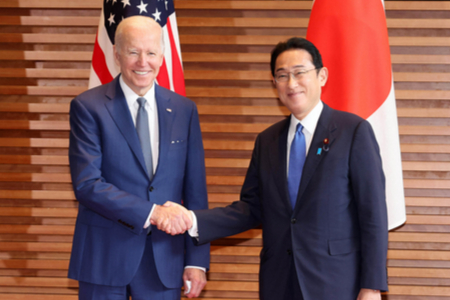 How Japan is building on U.S. policy for economic security

The economic security promotion law, which was enacted in May, aims to comprehensively and effectively facilitate the implementation of economic policies to achieve national security.

The law is made up of four pillars: strengthening supply chains for critical materials; ensuring the security of core infrastructure; promoting the development of key advanced technologies; and keeping patents on sensitive technologies that could be used for military purposes undisclosed.

The government had been implementing economic security-related policies under the framework of the security export control system based on the Foreign Exchange and Foreign Trade Law.

The framework, which originated from export controls against Communist countries centering on the Soviet Union during the Cold War era, is designed to prevent cargo containing high-performance tools and technologies from industrialized nations falling into the hands of terrorists or countries of concern that are involved in the development and production of weapons of mass destruction.

Moreover, Japan, as a major trading nation, has promoted public-private cooperation to secure a stable supply of energy sources such as oil and natural gas and mineral resources such as iron, steel, coal and rare metals, as well as other materials and food.

The country’s efforts included strengthening the free trade system and market access to secure its share, diversifying sources of supply, conducting independent development and boosting reserves, all of which had been implemented at the same time.

However, today’s geoeconomic macro trends are showing structural changes that do not allow Japan to maintain its industrial competitiveness and security only through existing policies.

The biggest change is the rise of emerging countries centering on China backed by state capitalism.

In such emerging countries, state-run companies and flagship firms strongly influenced by the state are achieving exponential growth in such sectors as energy resources, finance, information technology and telecommunications.

The next key point is the fact that the global economy is seeing growing technological competition and division.

It is said that the key to creating a next-generation industry is to fuse the digital and physical worlds — through data accumulation of human movements, large-scale high-speed communication and artificial intelligence — and transform the concepts of production, labor, services and daily lives.

The problem is that technologies that serve as the platform of such transformation are increasingly fragmented in the world.

Particularly, the United States and China are experiencing fierce competition in the areas of calculation and mass data processing hardware, IT infrastructure, electronic transaction services and in the development of emerging technologies.

Such technological foundations have a great impact on the fields of life science, full automation technologies and the development of next-generation weapons.

Even more importantly, there have been more cases of countries taking advantage of the possession of sensitive technologies or supply chains to conduct coercive diplomacy — what political scientists Henry Farrell and Abraham Newman have called “weaponized interdependence.”

Such cases include China’s restriction of rare earths exports to Japan following Tokyo’s arrest of the captain of a Chinese fishing boat that collided with Japan Coast Guard vessels near the Senkaku Islands in 2010, and Beijing imposing anti-dumping duties on Australian wine in 2021.

Addressing a meeting of the Chinese Communist Party’s Central Financial and Economic Affairs Commission in April 2020, Chinese President Xi Jinping said, “We must tighten international production chains’ dependence on China, forming a powerful countermeasure and deterrent capability against foreigners who would artificially cut off supply (to China).” This is a typical example of weaponized interdependence.

The more asymmetric the interdependence with China is — meaning the more a country is unilaterally dependent on China — the more likely it is for the country to fall prey to Beijing’s coercive diplomacy.

This is how the rise of state capitalism in the international economic order, technological competition and division, and weaponized interdependence became challenges in geoeconomic macro trends that we have to face.

The U.S. government has been the first to work comprehensively with such changes in geoeconomic macro trends.

“We welcome all economic relationships rooted in fairness, reciprocity, and faithful adherence to the rules,” the strategy document said. “But the United States will no longer turn a blind eye to violations, cheating, or economic aggression.”

The National Defense Authorization Act (NDAA) for the 2019 fiscal year that followed listed comprehensive policies on investments by foreign firms, strengthening control on China-bound exports, restrictions on federal procurements, promotion of development of advanced technologies and control on the outflow of technologies.

The law broadens the scope of transactions subject to CFIUS review to prevent foreign firms’ involvement in investments on critical technologies and key infrastructure, as well as their exploitation of sensitive personal data.

The Export Administration Regulations (EAR) under the ECRA contain the “entity list” — a list of names of foreign people or entities engaging in activities that are contrary to the national security or foreign policy interests of the United States.

Those on the list, determined by the end-user review committee composed of representatives of U.S. departments and agencies, are subject to specific license requirements for the export of specified items — and applications for such license requirements are usually denied.

The U.S. further tightened regulations for transactions of items subject to EAR by utilizing the system of re-export control, by which U.S. laws are effectively applied to items of U.S. origin that are shipped from a country outside of the U.S. to a third country.

In 2020, it added a new “military end user list” to restrict exports and re-exports of items subject to EAR to those determined by the U.S. government to be military end users in countries of concern.

Under this rule, if a firm is identified as a military end user in a country of concern, exports, re-exports or transfer of any covered item to that user requires a license issued by the U.S. Department of Commerce, even if the item is destined for civilian end-use.

Moreover, regarding federal procurement, section 889 of the 2019 NDAA prohibits government agencies from procuring telecommunications or video surveillance equipment, systems or services provided by certain companies that are deemed to pose risks.

The moves are aimed at breaking away from dependence on China regarding those sensitive technologies and key industries by boosting domestic production and cooperating with allies that have major companies in the fields.

As for funding the development of cutting-edge technologies, the key part of the economic security promotion law, it has been reported that the government plans to focus on 20 priority technology fields.

The 20 fields mostly match the 14 emerging and foundational technologies listed by the U.S. under the ECRA.

The sectors that are unique to Japan’s list are: advanced energy; energy storage; chemical, biological, radiological and nuclear materials.

This indicates Japan’s intention to coordinate policies with Washington over development of key advanced technologies while making clear its own priorities.

Efforts should be made to strengthen control on supply chains not only in Japan and the U.S. but also among the “Quad” framework of Japan, the U.S., Australia and India, as well as among Japan, the U.S. and South Korea, and among the Group of Seven members.

On the other hand, Japanese industries have criticized the U.S. for applying its export control measures on re-exports.

Japan and the U.S. must regularly exchange information on the designation of emerging technologies and end users of concern.

U.S. export control measures, including the entity list and the military end user list, should not be determined unilaterally by the U.S. but through negotiations with its allies.

In order for that to happen, it is essential to make high-level negotiations under the framework of the economic “two-plus-two” meeting of ministers a place for policy coordination.

At the same time, Japan should fundamentally boost the domestic development and use of civil technologies also from the perspective of strategic inevitability.

Disclaimer: The views expressed in this API Geoeconomic Briefing do not necessarily reflect those of the API, the Institute of Geoeconomics (IOG) or any other organizations to which the author belongs.