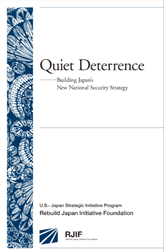 Rebuild Japan Initiative Foundation (RJIF) has published its latest report titled “Quiet Deterrence – Building Japan’s New National Security Strategy- “ which is based upon the discussions from RJIF’s U.S.- Japan Strategic Vision Program.  Dr. Kurt Campbell and Dr. Michael Green, RJIF’s distinguished guest scholars represent the U.S. side, together with Japan’s next generation of experts such as Dr. Ken Jimbo of Keio University, Dr. Nobumasa Akiyama of Hitotsubashi University  and Dr. Toshihiro Nakayama of Keio University  have engaged in a discussions at a series of study sessions  on  foreign and security policy, through which various issues including  national security policy, public diplomacy, intelligence, and crisis management were examined.

This report, “Quiet Deterrence”, is co-authored by the Japanese members based upon the discussions above. We believe this to be a viable alternative to Japan’s National Security Strategy (NSS) endorsed by the Government of Japan in 2013. Ahead of this report, the excerpt version appeared in the January 2014 issue of Chuo Koron (in Japanese).