A Tokyo-based think tank sharing better ideas for Japan and the world
MENU
2019.01.21 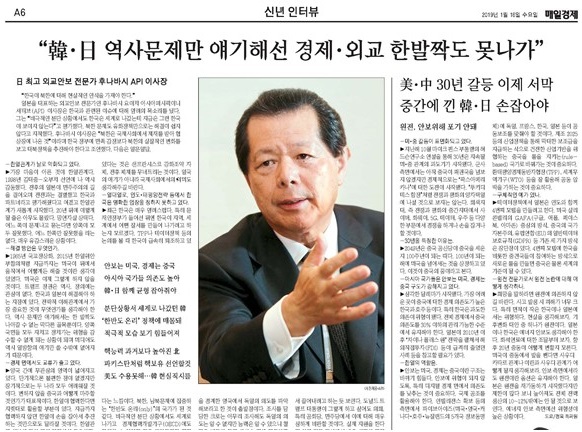 In his remarks, Dr. Funabashi argued that South Korea’s foreign policy is overly focused on North Korea, in which he pointed out the difficulty in solving North Korea related problems with only a policy of appeasement. Furthermore, he stated that “North Korea has come to the negotiating table because of international sanctions.”

Regarding current Japan-South Korea relations, he noted that most people think the U.S. would help to support this relationship, as demonstrated through past examples such as the “diplomatic normalization between South Korea and Japan in 1965” and in “reaching an agreement on the historical issue regarding Korean comfort women in 2015.” However, he claimed that “United States will no longer intrude on matters anymore. The current Trump administration has no interest in history or justice.

Japan and South Korea are at a point where they need to resolve their problems by themselves. We should consider what is most important with strategic interests in mind.” He commented, moreover, that “we cannot take steps forward if we remain stuck at historical problems.”