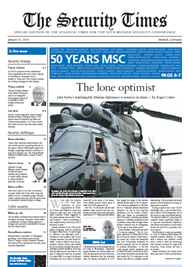 Our Chairman Dr. Yoichi Funabashi’s article titled “Quiet Deterrence” appeared in the Security Times distributed at the 50th Munich Security Conference which was held from February 1 to February 3. The Security Times is an offshoot of the Atlantic times, a German-English-language paper. For this time, many pages were allotted to the Asia-Pacific issue. Along with Dr.Funabashi’s article, Japanese Foreign Minister Fumio Kishida also contributed to this paper.