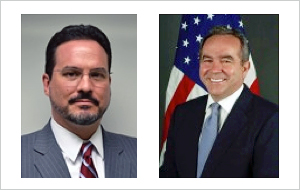 “RJIF is very proud to announce the appointment of two figures at the forefront of international politics – Dr. Kurt M. Campbell and Dr. Michael J. Green – as distinguished guest scholars. With the support of these world-class scholars, both bringing outstanding expertise and experience, we will launch the U.S.-Japan Strategic Vision Program. Through bipartisan policy dialogues between the two figures and Japanese experts on diplomacy and security, the program aims to propose new U.S.-Japan strategic visions for the future,” says Dr. Yoichi Funabashi, Chairman of RJIF.

Already we have welcomed Dr. Campbell last March for a two-day visit to Tokyo, during which he met with key government officials including Prime Minister Shinzo Abe, business leaders, and experts to exchange views and ideas regarding current US-Japan relations and to share his experiences as Assistant Secretary of State in the Obama Administration. In addition, Dr. Green will be leading the first project of our new U.S.-Japan Strategic Vision Program as a resident fellow at RJIF during June and July. This project was established to propose innovative ideas and policies toward new US-Japan relations in various fields.
During his tenure as U.S. Assistant Secretary of State, a position he held until this February, Dr. Campbell served as the key actor for U.S. diplomacy in East Asia. He is widely credited with facilitating U.S. aid to Japan in the wake of the Great East Japan Earthquake and for being the primary architect of the recent “pivot to Asia”.
Dr. Green, meanwhile, was deeply involved in strengthening the U.S.-Japan alliance during the Clinton and Bush administrations while serving on the staff of the National Security Council from 2001 through 2005, first as Director for Asian Affairs and then as Special Assistant to the President for National Security Affairs and Senior Director for Asia. He has been a leading expert on U.S. diplomacy in Asia.
On the occasion of their appointment as distinguished guest scholars at RJIF, Dr. Campbell and Dr. Green delivered the following comments:
“I’m thrilled and honored to be appointed as a distinguished scholar at the Rebuild Japan Initiative Foundation. At a time when Northeast Asia remains the driving force behind the global economic recovery and yet features many of the world’s most pressing geopolitical challenges, the U.S.-Japan alliance will play a critical role in ensuring stability and continued growth in the region. I am delighted to have the opportunity to work together with my esteemed colleagues, Dr. Green and Dr. Funabashi.” (Dr. Campbell)
“The U.S.-Japan alliance has never been more important to stability in Asia and the Pacific, but we need to stress-test the foundations from the bottom up. This has to be done strategically and independently and I am honored to join Dr. Campbell and Dr. Funabashi on this new RJIF endeavor.” (Dr. Green)

Former Assistant Secretary of State for East Asian and Pacific Affairs;
Co-Chair of the Board of Directors, Center for a New American Society;
Founding Partner, Chairman, and CEO of The Asia Group, LLC

Kurt M. Campbell is currently Co-Chair of the Board at the Center for a New American Security (CNAS) and Founding Partner, Chairman, and CEO of The Asia Group, a strategic advisory and investment group specializing in the dynamic and fast-growing Asia Pacific region. Dr. Campbell also contributes a regular column for the Financial Times and is writing a book about his experiences working on Asia in the Obama Administration, entitled The Pivot. From 2009 to 2013, he served as the Assistant Secretary of State for East Asian and Pacific Affairs, in which capacity he is widely credited as being a key architect of the “pivot to Asia”. Previously, he also served as Director of the Aspen Strategy Group, Chairman of the Editorial Board for the Washington Quarterly, founder and Chairman of StratAsia, and Senior Vice President, International Security Program Director, and Henry A. Kissinger Chair at CSIS.

Dr. Green is Senior Vice President for Asia and Japan Chair at CSIS and an associate professor at the Edmund A. Walsh School of Foreign Service at Georgetown University. He served on the staff of the National Security Council (NSC) from 2001 through 2005, first as Director for Asian Affairs, with responsibility for Japan, Korea, Australia, and New Zealand, and then as Special Assistant to the President for National Security Affairs and Senior Director for Asia, with responsibility for East Asia and South Asia. Before joining the NSC staff, he was Senior Fellow for East Asian Security at the Council on Foreign Relations, Director of the Edwin O. Reischauer Center and the Foreign Policy Institute, an assistant professor at the Paul H. Nitze School of Advanced International Studies (SAIS) at Johns Hopkins University, a research staff member at the Institute for Defense Analyses, and Senior Adviser on Asia in the Office of the Secretary of Defense. He also worked in Japan on the staff of a National Diet member.