A Tokyo-based think tank sharing better ideas for Japan and the world
MENU
2021.05.10 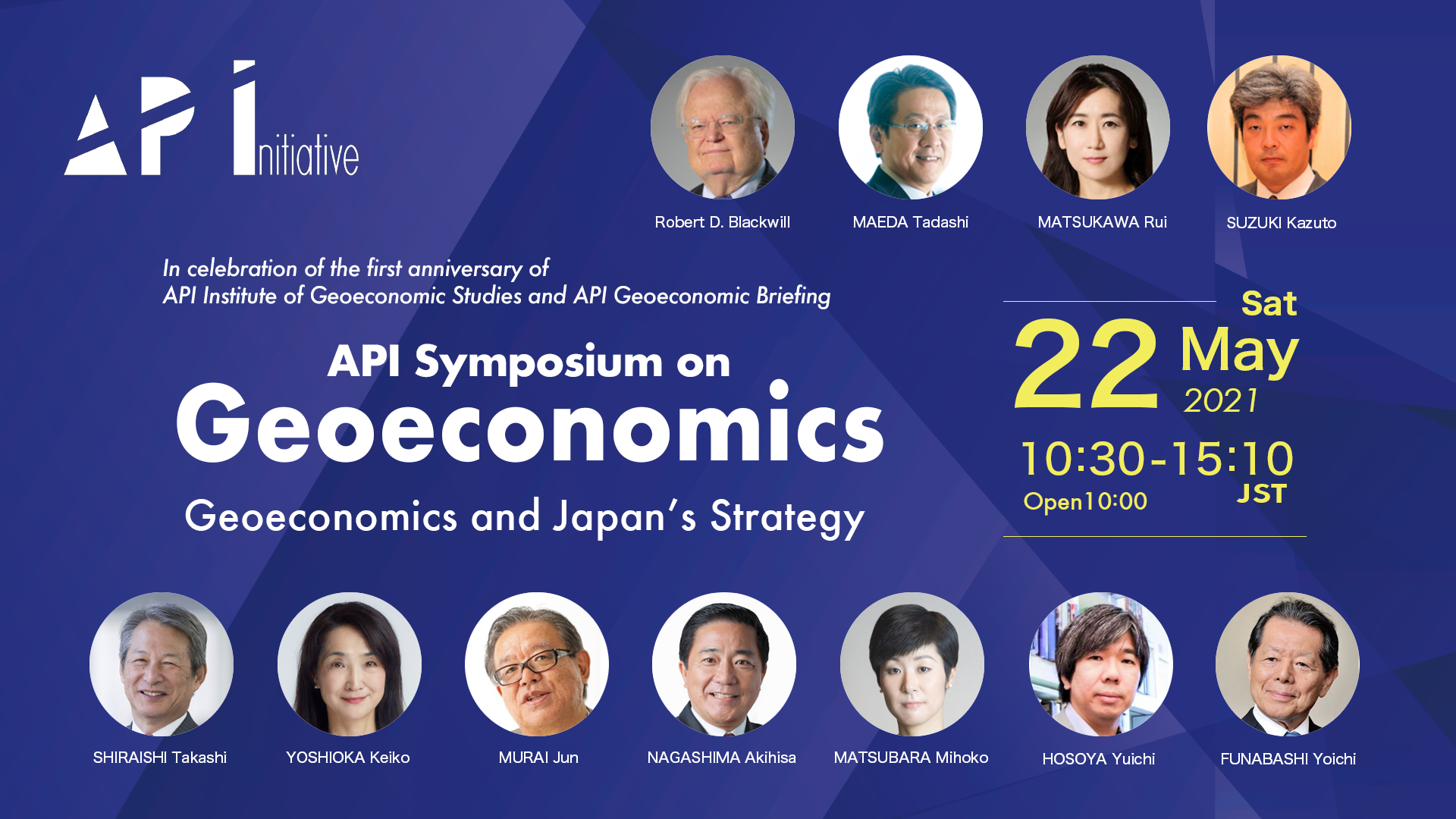 Today, it has increasingly become important for us to remember a tradition that stretches back to the founding of our nations – “the systematic use of economic instruments to accomplish geopolitical objectives.”

We are living in an age of geoeconomics and therefore we must ask ourselves: what strategies should governments, corporations, and individuals develop and how should they deal with the geoeconomic challenges that continue to arise, such as tensions in US-China relations, human rights issues, and the Myanmar coup?

Asia-Pacific Initiative (API) established the API Institute of Geoeconomic Studies (Dean: MURAI Jun) in April 2020 and has been publishing the API Geoeconomic Briefing every week since May of the same year. In celebration of its first anniversary, API has invited Robert D. Blackwill, co-author of ”War by Other Means” who argues in his recent report that Taiwan “is becoming the most dangerous flash point in the world for a possible war that involves the United States, China, and probably other major powers,” to hold the symposium as follows. Please join us for this special event.

This event will be a Webinar. Please register for this event through the link below and you will receive an email with the details to watch the event live:

PROFILE
Robert D. Blackwill is the Henry A. Kissinger senior fellow for U.S. foreign policy at the Council on Foreign Relations (CFR). Under President George W. Bush, Blackwill served as deputy assistant to the president and deputy national security advisor for strategic planning. He was also U.S. ambassador to India from 2001 to 2003. Blackwill’s most recent book is War by Other Means: Geoeconomics and Statecraft (Harvard University Press, April 2016), coauthored with Jennifer M. Harris. He and Dr. Philip Zelikow coauthored the CFR Special Report The United States, China, and Taiwan: A Strategy to Prevent War (February 2021) and a March 1, 2021 War on the Rocks article “Can the United States Prevent a War Over Taiwan?,” which addresses reactions to the CFR Report.

He is a member of CFR, the Aspen Strategy Group, and the International Institute for Strategic Studies.

Graduated University of Tokyo Faculty of Law in 1980. At JBIC, he has held various positions including Director-General of Energy and Natural Resources Finance Department; Director-General of Corporate Planning Department ; Managing Executive Officer, Global Head of Infrastructure and Environment Finance Group; Senior Managing Director and CEO, Executive Managing Director. From June 2010 to December 2012 he served as Special Advisor to the Cabinet in the Government of Japan. He has also served as a member of the Steering Committee of Nuclear Damage Liability Facilitation Fund from October 2011 to October 2013. He became a member of the IISS Council from June 2014 to 2017.

PROFILE
SUZUKI Kazuto is Professor of Science and Technology Policy at the Graduate School of Public Policy at the University of Tokyo, Japan. He graduated from the Department of International Relations, Ritsumeikan University, and received his Ph.D. from Sussex European Institute, University of Sussex, England. He has worked for the Fondation pour la recherche stratégique in Paris, France as an assistant researcher, as an Associate Professor at the University of Tsukuba from 2000 to 2008, and served as Professor of International Politics at Hokkaido University until 2020. He also spent one year at the School of Public and International Affairs at Princeton University from 2012 to 2013 as a visiting researcher. He served as an expert in the Panel of Experts for Iranian Sanction Committee under the United Nations Security Council from 2013 to July 2015. He has been the President of the Japan Association of International Security and Trade. His research focuses on the intersection of science/technology and international relations; and on subjects including space policy, non-proliferation, export control and sanctions. His recent work includes Space and International Politics (2011, in Japanese, awarded the Suntory Prize for Social Sciences and Humanities), Policy Logics and Institutions of European Space Collaboration (2003) and many others.

PROFILE
Shiraishi Takashi, born in 1950 in Japan; majored in international relations at the University of Tokyo (1972) and obtained Ph.D. in History from Cornell University in 1986. He taught at the University of Tokyo (1979-1987), Cornell University (1987-98), Kyoto University (1996-2005), and National Graduate Institute for Policy Studies (GRIPS) (2005-2009). He served as Executive Member, Council for Science and Technology Policy, Cabinet Office (2009-2012), President, GRIPS (2011-2017), President, Institute of Developing Economies-JETRO (2007-2018) and University Professor, Ritsumeikan University (2017-2018). He currently serves as Chancellor, Prefectural University of Kumamoto (since 2018). He was awarded the Medal with Purple Ribbon in 2007 and designated to the Order of Cultural Merit, 2016. In 2017, he received the Medal of Bintang Jasa Utama from the Republic of Indonesia for his contribution to Indonesian economic and education fields.

PROFILE
YOSHIOKA Keiko is a senior staff writer of the Asahi Shimbun, a Japanese leading newspaper. She has over 20 years’ experience in reporting on China issue, including as correspondent at Beijing and Shanghai. She also served as Senior Asia correspondent based in Bangkok to cover Belt and Road Initiative by China. She was a visiting fellow at Center for Strategic and International Studies (CSIS).

PROFILE
MURAI Jun received his Ph.D. in Computer Science in 1987 from Keio University, and majored in Computer Science, Computer Network, and Computer Communication. In 1984 he established JUNET (Japan University UNIX Network), the first network in Japan connecting multiple universities. In 1988 he established the WIDE (Widely Integrated Distributed Environment) Project, a Japanese Internet research consortium. He has long been engaged in research related to Internet technology platforms, and is known as the Father of the Internet in Japan, and as the Internet Samurai in international circles. He is a member of the Strategic Headquarters for the Promotion of an Advanced Information and Telecommunications Network Society (IT Strategic Headquarters), and of the Cyber Security Policy Council, National center of Incident readiness and Strategy for Cybersecurity (NISC), Cabinet Secretariat. He also chairs and serves on many other governmental committees, and is active in numerous international scientific associations. He was a member of the Internet Architecture Board (IAB) from 1993-95, the board of trustees of the Internet Society (ISOC) from 1997-2000, and the board of directors of the Internet Corporation for Assigned Names and Numbers (ICANN) from 1998-2000. He was inducted into the 2013 Internet Hall of Fame (Pioneer), and his distinctions include the 2011 IEEE Internet Award, the 2005 Jonathan B. Postel Service Award, and Knight of the Legion of Honor, which he was awarded in 2019 by the French government.

PROFILE
NAGASHIMA Akihisa is a sixth-term member of the House of Representatives with the ruling Liberal Democratic Party. He currently serves as the ranking member of the House Committee on National Security. He previously served as Senior Vice Minister of Defense in 2012. Prior to his political career, Mr. Nagashima worked as Adjunct Senior Fellow at the Council on Foreign Relations. He received LL.M. from Keio University in 1988 and M.A. from the Paul H. Nitze School of Advanced International Studies of the Johns Hopkins University in 1997.

PROFILE
MATSUBARA Mihiko is Chief Cybersecurity Strategist, NTT Corporation, Tokyo, being responsible for cybersecurity thought leadership. She previously worked at the Japanese Ministry of Defense before her MA at the Johns Hopkins School of Advanced International Studies in Washington DC on Fulbright. Prior to NTT, she was VP and Public Sector Chief Security Officer for Asia-Pacific at Palo Alto Networks. She served on Japanese government’s cybersecurity R&D policy committee between 2014 and 2018.

Mihoko is a prolific writer and has published articles from the Council on Foreign Relations, Lawfare, New America, the RUSI Journal, etc. She published a cybersecurity book from the Shinchosha Publishing Co., Ltd in 2019, which won a JFY 2020 award by the Okawa Foundation for Information and Telecommunications. She has spoken at various engagements internationally such as the NIST Cybersecurity Risk Management Conference 2018 in Baltimore, the RSA Conference 2018 and 2019 in San Francisco, the EU Cyber Forum 2019 in Brussels, and CyCon 2015 and 2019 in Tallinn, Estonia. She is Adjunct Fellow at the Pacific Forum, Honolulu, and Associate Fellow at the Henry Jackson Society, London.

HOSOYA Yuichi is professor of international politics at Keio University, Tokyo. Professor Hosoya was a member of the Advisory Board at Japan’s National Security Council (NSC) (2014-2016). He was also a member of Prime Minister’s Advisory Panel on Reconstruction of the Legal Basis for Security (2013-14), and Prime Minister’s Advisory Panel on National Security and Defense Capabilities (2013). Professor Hosoya studied international politics at Rikkyo (BA), Birmingham (MIS), and Keio (Ph.D.). He was a visiting professor and Japan Chair (2009–2010) at Sciences-Po in Paris (Institut d’Études Politiques) and a visiting fellow (Fulbright Fellow, 2008–2009) at Princeton University. His research interests include the postwar international history, British diplomatic history, Japanese foreign and security policy, and contemporary East Asian international politics. His most recent publications include Security Politics: Legislation for a New Security Environment (Tokyo: JPIC, 2019). His comments appeared at New York Times, Washington Post, Financial Times, USA Today, Die Welt and Le Monde, as well as at major Japanese media.

Formerly editor-in-chief of the Asahi Shimbun, he is a member of the International Institute for Strategic Studies (IISS) Advisory Council. His books include “What is a think tank?” (2019). He received Ph.D. from Keio University in 1992.

For questions or inquiries about this symposium, please contact us here.