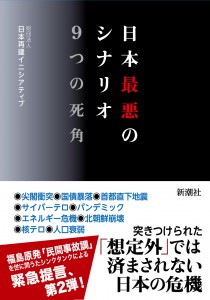 We are pleased to announce that a new RJIF book titled “Japan’s Worst-case Scenarios: The Nine Blind spots (in Japanese)” has been published from Shincho-sya Publishing Ltd on March 15, 2013.

After RJIF’s first project, “The Independent Investigation Commission on the Fukushima Nuclear Accident”, it was evident that Japan’s crisis management system was vulnerable. Therefore we initiated the “Crisis Management Project” in May 2012. We focused on 9 crises that Japan may face in the near future such as natural disasters, terrorism and military clashes and evaluated the current system’s issues.

In the project, we had 11 scholars and specialists determine the crisis management blind spots by looking at worst case scenarios per theme. Furthermore, we wanted to determine the process that would be taken if such crises were to occur. We had five researchers and experts conduct an inter-disciplinary analysis of the cases from five different viewpoints (the legislative system, state-citizen cooperation, external strategy, government and communication) and suggest necessary counter-crisis measures.  On the occasion of publication, we had editors conduct a rewrite based on the established scenario from the discussions between the authors of each topic and research members.

The project core members presented the outline of the 9 worst case scenarios and the results of the analyses at CLSA seminar 2013 held on February 27th.

The details of the CLSA seminar