A Tokyo-based think tank sharing better ideas for Japan and the world
MENU
2019.05.31 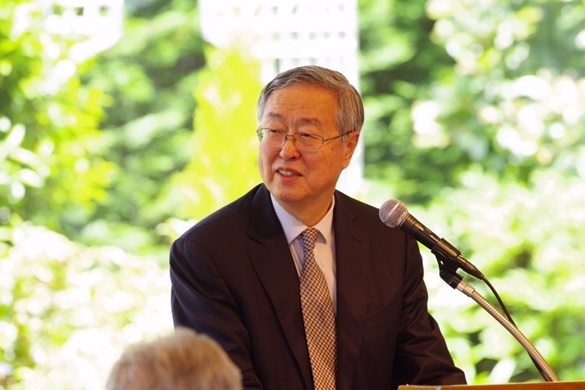 The round-table welcomed Dr. Zhou Xiaochuan, former Governor of the People’s Bank of China (PBOC), as a keynote speaker. Dr. Zhou is the longest-serving governor of the PBOC, having led the bank for 15 years until March 2018. He has since served as Vice Chairman of the Boao Forum for Asia.
Seventeen top leaders from the financial and academic sectors in China participated in the event, including Ms. Hu Xiaolian (Chairman of the Export-Import Bank of China), Mr. Li Bo (Vice-Chairman of the All-China Federation of Returned Overseas Chinese), Mr. Qi Bin (Executive Vice President of China Investment Corporation), Mr. Xie Duo (Chairman of the Silk Road Fund) and Mr. Yang Guohua (Professor at the Tsinghua University School of Law).

Following the opening greeting by Dr. Yoichi Funabashi, Chairman of API, Dr. Zhou delivered a speech in which he stressed that Asian countries are the driving force of global economic growth. He also said that China and Japan, the world’s second and third largest economies, should work together to encourage Asia’s development and prosperity by promoting the multilateral trade system and economic globalization.

In response to Dr. Zhou’s remarks, Takeshi Niinami (President & CEO of Suntory Holdings Limited; Member of the Japanese Government’s Council on Economic and Fiscal Policy; API Co-Founder) introduced the Japanese government’s approach to Japan’s declining birthrate and aging population, suggesting that it could serve as an example for the similar situation emerging in China.
Mr. Maeda outlined ongoing projects in collaboration with China to invest in the public sector in Asia, while Ms. Xiaolian stressed once again the importance of cooperation between China and Japan, citing the successful geothermal plant joint project in Kenya.
The participants then proactively exchanged their opinions and questions in an open discussion session.